Is Vision Correction Surgery is Right for You?
Book LASIK Consult Online

Mommy Blogger Destiney Greens’ Path to Visual Freedom
As a new mom trying to navigate motherhood, Destiney Green came to a realization….if she was going to do motherhood the way she wanted to, she needed to lean on the community of moms around her and create a place to share and learn from each other’s experiences. Destiney created her blog Mom Crush Monday out of appreciation for all mothers; those who helped guide her in the past, those who will help her in the future and those she may never cross paths with but are out there doing motherhood on their own terms. Mom Crush Monday was created to be a place of solace and community for all moms out there navigating the path of modern motherhood.

“Within four hours of my LASIK procedure, it was like I was a whole new person who hadn’t just had eye surgery that morning. I made Honor sit in front of me for way longer than she would have liked, but I couldn’t stop staring at her face and taking in every detail.” 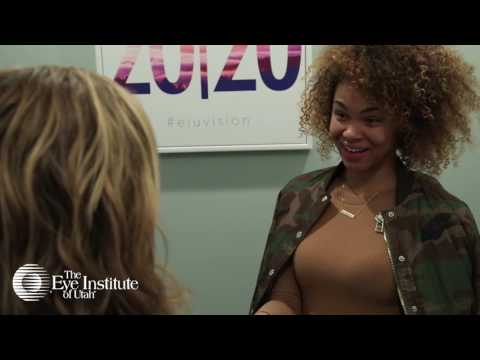 Destiney, a lifetime glasses-wearer, found that activities with her daughter Honor were less enjoyable due to her nearsightedness. Frequent headaches and blurry street signs had become the norm. She knew she would benefit from vision correction surgery, but struggled when it came to making the decision to go for it. With her daughter’s needs as her top priority, she worried about the cost of LASIK and how it might impact things she wanted for Honor. She also worried about the potential downtime after the procedure and how that would affect her parenting responsibilities. After her initial LASIK consultation, she was relieved to be able to put those fears to rest and take the leap to schedule her procedure.

The visual freedom she has experienced since her LASIK procedure has made Destiney’s ability to parent much easier and made even the smallest moments more enjoyable. She had no idea how many moments she was missing out on because her eyes couldn’t pick up on all the details. After her surgery, Destiney realized that her initial reservations about the procedure could not compare to the benefits she now shares with her daughter everyday, and her only regret was not having the procedure sooner!

I highly recommend the doctors at The Eye Institute of Utah for LASIK. I have nothing but wonderful things to say about the entire team and the facilities. They treat you with the utmost care & respect, and make your experience and results their top priority.”

The Eye Institute of Utah Doctors have either authored or reviewed and approved this content.