Is Vision Correction Surgery is Right for You?
Book LASIK Consult Online 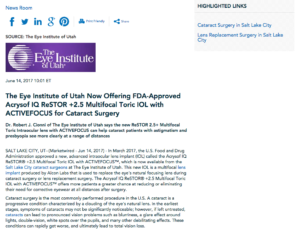 Dr. Robert J. Cionni of The Eye Institute of Utah says the new ReSTOR® 2.5+ Multifocal Toric Intraocular lens with ACTIVEFOCUS™ can help cataract patients with astigmatism and presbyopia see more clearly at a range of distances.

Salt Lake City, UT – In March 2017, the U.S. Food and Drug Administration approved a new, advanced intraocular lens implant (IOL) called the Acryfof IQ ReSTOR® +2.5 Multifocal Toric IOL with ACTIVEFOCUS™, which is now available from the Salt Lake City cataract surgeons at The Eye Institute of Utah. This new IOL is a multifocal lens implant produced by Alcon Labs that is used to replace the eye’s natural focusing lens during cataract surgery or lens replacement surgery. The Acryfof IQ ReSTOR® +2.5 Multifocal Toric IOL with ACTIVEFOCUS™ offers more patients a greater chance at reducing or eliminating their need for corrective eyewear at all distances after surgery.

Cataract surgery is the most commonly performed procedure in the U.S. A cataract is a progressive condition characterized by a clouding of the eye’s natural lens. In the earliest stages, symptoms of cataracts may not be significantly noticeable; however, if left untreated, cataracts can lead to pronounced vision problems such as blurriness, a glare effect around lights, double-vision, white spots over the pupils, and many other debilitating effects. These conditions can rapidly get worse, and ultimately lead to total vision loss.

Most individuals will be affected by cataracts at some point in their lifetimes. It is estimated that more than three million Americans have cataract surgery each year, and about 1 in 3 Americans have a condition called astigmatism. Astigmatism is a type of refractive error where the eye is shaped more oblong, like a football, instead of spherical, like a baseball. This shape results in blurry vision at all distances. Both the Acrysof IQ ReSTOR® +2.5 Multifocal Toric IOL with ACTIVEFOCUS™ and the ReSTOR® Multifocal Toric IOL use advanced technology to address both presbyopia (the need for reading glasses) and astigmatism simultaneously, which can provide clear vision at all distances after surgery.

“Prior to the recent FDA approval of both the ReSTOR® Toric and Symfony® Toric IOLs, multifocal lens implants were only an option for a small percentage of patients seeking to obtain good vision at all distances,” explained Dr. Robert J. Cionni. Dr. Cionni is the medical director at The Eye Institute of Utah and past-president of the American Society of Cataract and Refractive Surgery (ASCRS). “These new IOLs now allow more patients than ever before the ability to greatly reduce their need for corrective glasses after cataract surgery.”

As a principal investigator during clinical trials for the ReSTOR® Toric IOL, Dr. Cionni was instrumental in helping the lens obtain FDA approval.

The ReSTOR® +2.5 Multifocal Toric IOL with ACTIVEFOCUS™ is one of only three types of IOLs available in the United States that can correct for vision at multiple distances, while simultaneously correcting astigmatism. Doctors at The Eye Institute of Utah say there are a number of different intraocular lenses that can be used for both cataract surgery and refractive lens exchange (RLE) surgery, so individuals should schedule a comprehensive examination with an experienced ophthalmologist to determine their candidacy for various IOL options.

Next Previous
Request A Consultation X